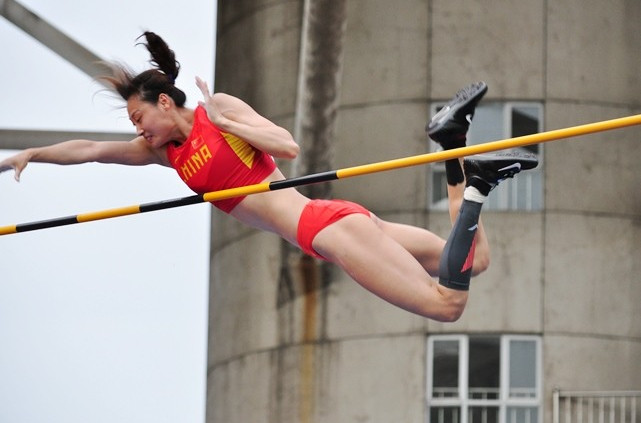 Chinese pole vaulter Li Ling broke the Asian record to send the home crowd into raptures on the third day of competition at the Asian Athletics Championships in Wuhan.

The Asian Games champion leapt 4.66 metres, beating her own previous mark by a centimetre to seal gold and provide her with excellent preparation ahead of the International Association of Athletics Federations (IAAF) World Championships in Beijing in August.

“I am happy with what I did today,” she said.

“Now I will be preparing towards another podium finish in this year’s World Championship at our national capital Beijing.”

Double Asian Games gold medallist Kemi Adekoya of Bahrain was another athlete in impressive form as the Nigerian-born star set a world leading time in the 400m hurdles by clocking 54.31.

The result was both a national record and a personal best for the upcoming 22-year-old, who finished comfortably ahead of Kira Manami of Japan and China’s Xiao Xia.

John Koech secured Bahrain’s second gold of the day as he won the men’s 3000m steeplechase in 8:27.03, while India were also at the double thanks to discus thrower Vikas Gowda and athlete Lalita Babar.

Gowda managed to successfully defend his Asian Athletics Championships discus title by throwing 62.03m, which ensured he topped the podium ahead of Kuwaiti Eisa Zankawi and Mahmoud Samimi of Iran.

Babar, who won bronze in Incheon last year, meanwhile proved the dominant force in the women’s steeplechase, setting a national record and recording a personal best time of 9:34.13.

China's Li Zhenzhu came through to take silver and Zhang Xiyan rounded off another decent event for the hosts with bronze.

El Hassan El Abbassi continued a fruitful day for Bahrain with gold in the 10,000m race and his time of 28:50.71 was enough to beat G Lakshmanan of India, who won bronze in the 5,000m on the opening day, and Uzebkistan's Andrey Petrov.

There was an upset in the triple jump as Kim Deok-Hyeon leapt 16.86m to clinch gold ahead of home favourite Cao Shuo, who posted 16.77m, while Roman Valiyev of Kazakhstan was third.

Taiwan also managed to claim gold thanks to Huang Shih-Feng, who reigned supreme in the men’s javelin by throwing an impressive 79.74m.

Defending champion Ivan Zaytsev of Uzbekistan had to settle for second and Japan’s Yukifumi Marakami was able to secure the final podium place as he took third.