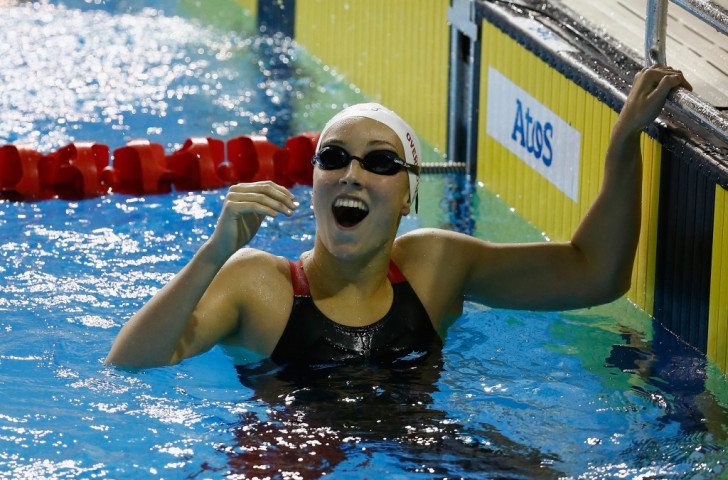 Canada's Emily Overholt recovered superbly from the blow of being disqualified after initially finishing first last night at the Pan American Games by storming to a superb victory in the 400 metres freestyle here on an evening in which Bahamas claimed gold and two Caribbean nations secured maiden medals.

It is often said that it is not those who make no mistakes who succeed in life, but those who respond best after making them.

This rang true as the 17-year-old Overholt showed experience beyond her tender years in responding to her disqualification last night after failing to touch simultaneously during the breaststroke-leg of the 400m individual medley.

Swimming from lane eight after a lacklustre performance in qualifying this morning, Overholt  took the lead from virtually the very first stroke before powering away to win in a Games record time of 4min 08.42sec.

She narrowly held off Venezuela's Andreina Pinto, who earned silver in 4:08.67, while American Gillian Ryan placed third in 4:09.46.

"I wanted to be in the lead from the beginning so I could see everybody from the outside and I really had nothing to lose, so I went for it and I tried to hold it for as long as possible," said Overholt.

"Last night was heartbreaking, I wanted to win so badly today to make up for it, I'm so happy right now."

It was a night of more success for the sport's dominant nations here, with Overholt's victory swiftly followed by one for compatriot Ryan Cochrane in the equivalent men's race.

There were also three United States victories, for Nicholas Thoman over 100m backstroke in 53.20, Katie Meili in the 100m breaststroke in 1:06.26 and Josh Schneider in the concluding 50m freestyle in 21.86, but it was the win for Arianna Vanderpool-Wallace in the women's 50m freestyle which broke the script.

She led throughout to win 24.38 on a night which also included Jamaican silver for Aria Atkinson behind Meili and Trinidad and Tobago bronze for George Bovill behind Schneider, the first medal of these Games in any sport for both nations.

At the other end of the medals table hosts Canada remained dominant, passing the 100 medals mark today.

With 45 gold medals, they still sit five clear of closest rivals US.

Other victories for Canada today came at the Mattamy National Cycling Centre for the women's team pursuit quartet and for Monique Sullivan in the keirin.

Other victories were in the men's squash team event and for female wrestling pair Braxton Stone and Dori Yeats in their respective under 63 and under 69 kilogram freestyle events.

Colombia became the first nation other than the hosts to win in track cycling, however, as world champion Fernando Gaviria Rendon won the omnium to follow a keirin bronze claimed by sister Juliana.

History was made in the men's team archery final as, after nine successive victories since the event was introduced at San Juan 1979, the US were finally beaten.

Mexico recovered from losing the opening set to claim a superb 6-2 triumph.

Colombia had earlier surprised the Mexicans to win the corresponding women's final.