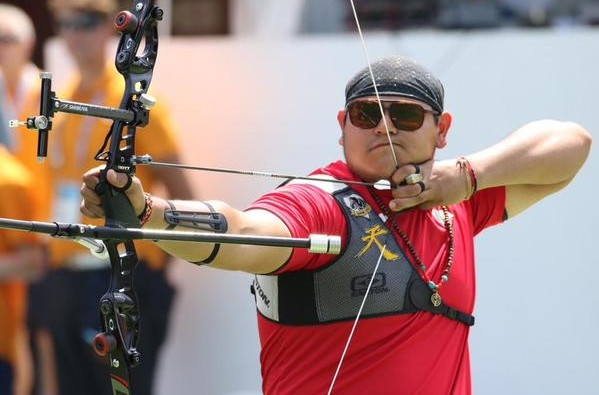 Mexico's Luis Alvarez recovered superbly from a near-calamitous mistake in the fourth set to claim gold in the Pan American Games archery final today after Kathuna Lorig, the American who trained Hunger Games actress Jennifer Lawrence to use a bow, won the women's title.

This followed their men's team losing the final yesterday to Mexico following nine successful victories dating back to San Juan 1979.

The Mexicans were confident of more success today as Alvarez, a member of that gold medal winning team, cruised past leading qualifier Zach Garrett to set-up a final against defending champion Brady Ellison, winner of last year's World Cup Final in Lausanne.

In a high quality start, five successive nines were shot before Alvarez sealed the set with a perfect 10, with the 24-year-old then shooting three successive 10s in the third set to move into a 4-0 lead.

Ellison has not been one of the sport's leading stars in recent years for nothing, however, and the 26-year-old returned the compliment with three perfect arrows as Alvarez faltered in the third.

Cue drama as, after a succession of nines, the Mexican required a 10 to claim gold only to miss the opportunity to shoot for it due to exceeding the 20 second period allocated for each attempt.

This led to a score of zero, meaning Ellison scored two points to level proceedings at 4-4 moving into a deciding fifth.

A weaker man may have crumbled at this point, but Alvarez responded brilliantly to shoot two 10s as his opponent could only manage nines, before sealing the set, match and gold medal with the following shot.

"I was like, 'Damn I missed it' because I knew that I just needed a nine...'Okay, okay you can do it, let’s go, let’s go,'" said the 24-year-old, who had beaten Brazilian teenage prodigy Marcus D'Almeida in the quarter-final.

"I was just one second late but it was okay but I just said 'well that went not okay but it’s okay, let’s go for the next set.'

"It was good, really good."

It marked only the second time in 10 Games in which the US has failed to take the men's gold following Cuban Adrian Puentes; victory at Rio 2007, with another blow struck in the bronze medal match as Garrett was beaten by Jay Leon of Canada.

There were no mistakes made in the women's event, however, as 41-year-old Lorig shocked Mexican favourite Aida Roman in the semi-final before comfortably beating Ana Maria Rendon, who led Colombia to team gold yesterday, 6-2 in the final.

After starting out competing for the Soviet Union, she won a team bronze medal using the surname Kvrivichvili as part of the Unified Team at Barcelona 1992 before competing for her native Georgia at Atlanta 1996 and Sydney 2000.

At Beijing 2008, however, she carried the US flag at the Closing Ceremony before finishing fourth individually at London 2012.

She since trained Hollywood star Jennifer Lawrence in how to shoot a bow ahead of her appearance in the movie franchise, Hunger Games.

Today's triumph was the biggest win of her illustrious career.

“That’s a dream come true,” she said after receiving her gold medal.

“I can’t wait to have that at the Olympics and the World Championships, that beautiful song, that anthem played for me.”

Karla Hinojosa won the all-Mexican bronze medal match over team mate Roman to claim the final place on the podium.