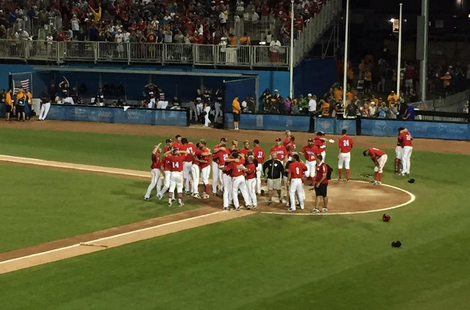 Canada clutched victory from the jaws of defeat tonight to win Pan American Games baseball gold in farcical, yet sensational, fashion over the United States in perhaps the outstanding sporting moment of Toronto 2015 so far.

After being finally overhauled yesterday evening, they may have lost further ground in the race for poll position on the medals table as the US moved five victories clear today.

The successful title defence under the floodlight at Ajax Park, though, will bring many a smile to the faces of many in this host country, particularly due to the manner of victory.

Canada had lost to Americans in the final match of the preliminary stage but were nevertheless favourites to repeat their victory over tonight's opponents four years ago in Guadalajara, with the raucous home crowd providing an extra boost.

Home runs were shared in the opening exchanges, with Rene Tosoni cancelling out Patrick Kivlehan before both sides missed opportunities to move ahead.

After nine innings they remained locked at 4-4 as the US showed all of the grit and tenacity that had saw them win a tight semi-final yesterday over eventual bronze medallists Cuba.

When Tyler Pastornicky scored a two-run single in the first extra end, they were on the cusp of gold.

With runners already on first and second base due to the international tie breaker rules in place for these Games, one Canadian runner made it home before US replacement pitcher David Huff audaciously attempted to pick off Pete Orr at first base, only to throw wildly into the outfield.

A desperate throw to third-base was then missed, allowing Orr to sprint home for the winning run in a 7-6 victory.

It was a wonderful end to an action packed day here, with the excitement of the baseball almost matched by two topsy-turvy taekwondo finals taking place at the same time.

Cuba Yaria Aguerra scored seven points in the final 15 seconds to win 10-9 over Itzel Manjarrez of Mexico in the women's under 49 kilograms event.

Carlos Navarro then provided some solace for Mexico, winning with golden point over Dominican Republic's Luisityo Pie in the men's under 58kg class.

Colombia were another nation to prosper today with a golden clean sweep on golf's Pan American Games debut.

Marcelo Rozo and Mariajo Uribe each came from two strokes behind at the beginning of the day to claim male and female titles.

They then teamed-up with Mateo Gomez and Paola Moreno to claim mixed team honours.

Fabian Puerta and the men's team pursuit squad then added further golds on the final day of track cycling, as Canada's Monique Sullivan won her third gold medal of the Games with victory over team mate Kate O'Brien in the sprint final.

There was also a Canadian double in trampolining and a surprise 20 kilometres men's race walk title at the beginning of the day for Evan Dunfee,

There was no doubting, however, which nation had most to celebrate - at least until the baseball finale.

Three US golds came in canoe slalom, with Casey Eichfeld claiming two of them.

Then Marilyn Little secured individual and team honours in three-day eventing, securing the team's qualification for next year's Olympic Games in Rio de Janeiro in the process.

Father and daughter duo Mark and Grace Modderman produced another US highligh, taking a sailing silver medal behind Guatemala's Jason Hess and Irene Abascal in the open hobie class.