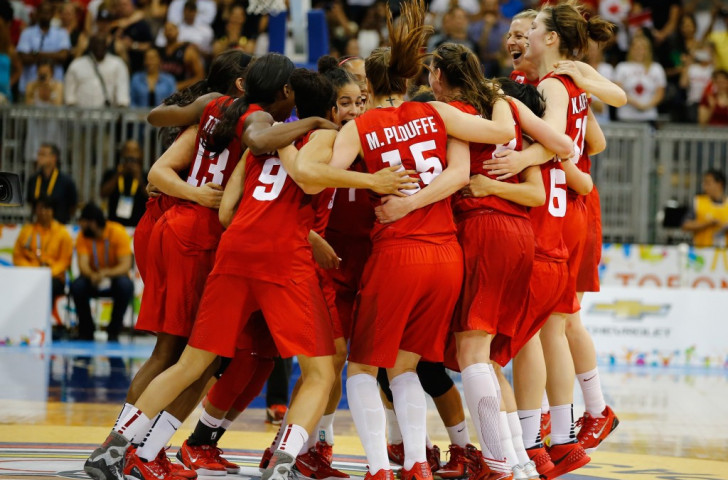 Canada made history this evening at Toronto 2015 with a first ever Pan American Games basketball gold as their women recovered from an early deficit to dispatch the United States 81-73 in an electric atmosphere generated by a sellout crowd.

After leading 23-13 in the first period, the US were pegged back to 36-36 at the halfway point before their opponents ran riot in the third quarter, overpowering their rivals with a superb blend of stifling defensive and clinical attacking play.

Guard Kia Nurse was the star for the Canadians, scoring a brilliant 33 points while Natalie Achonwa added a further 13.

It was not the strongest US team but it was still a great victory for a nation who have never won a men's medal and whose previous female high was silver behind Cuba at Winnipeg 1999.

Every home basket was greeted by a huge roar from the partisan supporters, most of whom were clad in Canadian red and white, with the only salutary note being the boos which accompanied many of the American attacks.

It proved a rare blip to end on for the US after a day of utter domination in which they won six of the other seven available golds to stretch their lead on the medals table to 10 over the host nation.

Three more were won in rhythmic gymnastics as well as one in taekwondo and two on the opening day of fencing action.

Those latter triumphs were particularly remarkable as most of the squad had only just flown in from the World Championships in Moscow, with Dagmara Wozniak claiming the women's sabre title just three days after securing bronze as part of the US team there.

She first defeated team mate and double Olympic champion Mariel Zagunis and then ended the dream of home favourite Gabriella Page in the semi-finals.

More of the same followed in the final as she proved too strong for Venezuelan opponent Alejandra Benitez, withstanding a late fightback to claim a 15-13 victory before admitting how difficult it had been to play the two events back to back.

"For me, it was a big physical struggle, coming back from Moscow less than two days ago," she said.

"So, out here, it was a big physical struggle to get touch by touch, most importantly, I kept my cool, I didn't freak out.

"A couple of times I was down, but I kept thinking 'I can do this, I just need one more touch, okay, I got that one, I need one more.'"

Her victory was swiftly followed by a triumph for compatriot Eli Dershwitz as the world junior champion overcame Joseph Polossifakis of Canada 15-9.

Another followed soon after in taekwondo as 18-year-old Cheyenne Lewis made her senior breakthrough with a dominant under 57kg victory over Mexico's Paulina Armeria, accruing 11 points without conceding a single one.

Just like last night, Mexico responded to defeat in the first final with victory in the second as Saul Gutierrez disappointed the home crowd by overcoming Canada's former world number one Maxime Potvin in the under 74kg division.

Earlier in the day, Laura Zeng had consolidated her status as the most successful athlete at these Games so far, by winning her fourth and fifth individual rhythmic gymnastics gold medals by virtue of victories in the clubs and ribbon events to add to her earlier ball, hoop and all-round triumphs.

Canadian artistic gymnast Ellie Black and Brazilian swimmer Thiaga Pereira, who has won a record 23 all-time Pan American Games medals, have each also enjoyed five podium finishes here, but with a silver and a bronze medal alongside three golds.

A third rhythmic gymnastics gold for the US, their sixth in eight events, came in the concluding clubs and hoops group final as they overhauled Brazil and Canada to win with a score of 14.983.