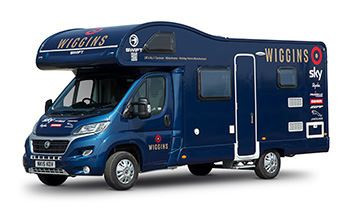 A large crowd of buyers attended the sale and following some competitive bidding the vehicle was sold to an online bidder.

The vehicle had generated a huge amount of interest with potential buyers, with over 1,400 views of the online catalogue listing prior to the sale.

The coachbuilt Sporthome by McLaren was based on a long-wheelbase Mercedes-Benz Sprinter 316 2.1 with manual transmission.

It was commissioned by Sir Bradley in 2014 and was vinyl wrapped in Team Wiggins colours of blue with chromed wing mirrors and bull bar and eight-spoke alloy wheels.

The Sporthome had covered 5,500 miles.

The Sporthome featured bespoke red, white and blue leather seating with "Wiggo" detail on the headrests.

The seating area featured two swivel seats and fold down table and five television screens, including two with Sky.

The driver’s area had two leather seats and a custom GB dashboard with integrated Kenwood satellite navigation and CD unit.

The vehicle was fitted with privacy blinds throughout for overnight stays and there was air conditioning throughout.

Sir Bradley is Britain's most decorated Olympian and the country's first winner of the Tour de France.

The track specialist shot to prominence aged 20 by winning an Olympic bronze medal as part of the British team pursuit quartet at Sydney 2000.

He claimed individual pursuit gold along with team silver and madison bronze four years later in Athens before an individual and team pursuit double at Beijing 2008.

His focus switched to the road thereafter, with a shock fourth place finish at the 2009 Tour de France later upgraded to third after the doping-related disqualification of Lance Armstrong.

In 2012 he won the Paris-Nice, the Tour de Romandie and the Critérium du Dauphiné before becoming the first British cyclist to win the Tour de France.

He followed that days later by claiming the road time trial gold medal at his home Olympic Games in London.

This led to him being named BBC Sports Personality of the Year and made a knight-of-the-realm.

A final Olympic gold medal followed in 2016 after he returned to the track in Rio de Janeiro as he became the first British Olympian in history to win eight medals.

Sir Bradley also won seven world titles on the track and a time trial global crown on the road in 2014.