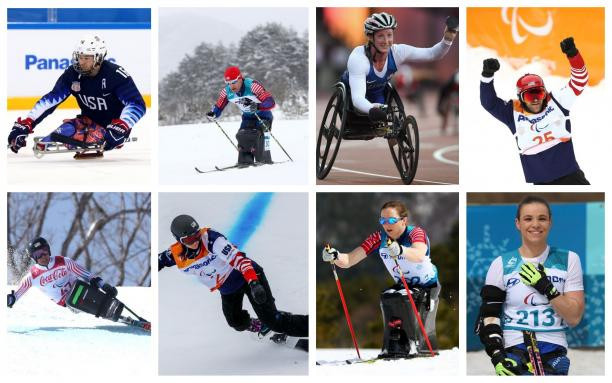 Eight Para-athletes from the United States have been nominated for ESPN's Excellence in Sports Performance Yearly (ESPY) Awards, after impressive performances at the Pyeongchang 2018 Paralympic Winter Games.

The annual awards celebrate both individual and team achievements in sport.

The winners are picked by fans who vote online.

They will be announced at a ceremony in Los Angeles on July 18.

Retired US Navy SEAL Dan Cnossen was the first US man to win a biathlon gold in either an Olympics or Paralympics.

He won a medal in all six of the events he entered, gaining four silvers and one bronze on top of his biathlon gold.

Alpine skiier Andrew Kurka won downhill gold and silver in the super-G sitting, having broken his back at Sochi 2014 and his right femur eight months later.

Para-ice hockey player Declan Farmer was Pyeognchang's top scorer and netted both the game tying goal to force overtime and the eventual match winner in the gold medal game against Canada.

Mike Schultz won snowboard cross gold on his Paralympic debut in Pyeongchang and also bagged a silver in the SB-LL1 banked slalom.

When he is not competing, Schultz runs a company called BioDapt, designing prosthetic legs used by many other athletes.

In the women's catagory, up for the award are Oksana Masters, Brenna Huckaby, Kendall Gretsch and Tatyana McFadden.

Masters overcame an arm injury to win five medals in the Nordic skiing, including two golds.

She left Pyeongchang as the most successful Nordic skiier in the history of the US Paralympic team.

Brenna Huckaby won both SB-LL1 competitions on her Paralympic debut.

She was the only US athlete to go undefeated at an individual event in Pyeongchang.

Gretsch, also on her debut, won gold in the biathlon sprint sitting and gold in the 12 kilometre cross-country event.

Like Crossen, she became the first US woman to win a biathlon gold in either an Olympics or Paralympics.

Finally, McFadden is the only athlete in either category to be nominated for a performance outside of the Winter Paralympics.

The 29-year-old, who was born in Russia, won the Boston Marathon having recently suffered from severe blood clots in her legs.

She is also a seven-time Paralympic champion.