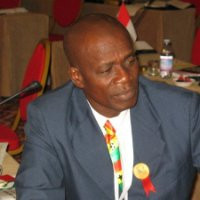 Ghana's Chef de Mission for the 2020 Olympic Games in Tokyo has started holding meetings with some of the country's national governing bodies in an attempt to ensure they are more ready than ever as they seek their first gold medal.

Paul Atchoe held a special meeting at the headquarters of the Ghana Olympic Committee (GOC) where he met the heads of a number of sports, including from boxing, rugby, swimming and taekwondo.

A special committee under Atchoe was launched last year at the Accra International Conference Center but he admitted preparations for Tokyo 2020 had slowed while Ghana concentrated on this year's Commonwealth Games in the Gold Coast, where they won one medal.

That was a bronze medal for boxer Jessie Lartey in the men's light welterweight division.

The Games, however, were overshadowed for Ghana by an alleged visa scam that led to several Government officials being suspended.

Atchoe, also the vice-president of the GOC, hopes that as the year draws to an end focus can return to Tokyo 2020.

"Ghana must be well represented in 2020 and the focus is on winning gold," he said.

Atchoe claimed that the Government is prepared to support Ghana's best prospects.

Ghana made its debut in the Olympic Games under their colonial name Gold Coast at Helsink 1952.

There were bronze medals for two other boxers, Eddie Blay at Tokyo 1964, also in the light welterweight division, and Prince Amartey as a middleweight at Munich 1972.

A men's football bronze was the last Olympic medal won by Ghana at Barcelona 1992.

Ghana came nowhere near a medal at Rio 2016.