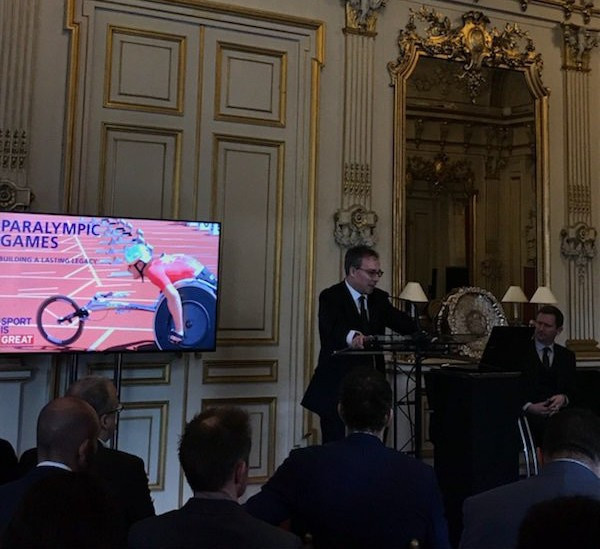 Discussions on how Paris can build a lasting legacy after the 2024 Paralympic Games have been held during an event at the British Embassy in the French capital.

Ed Llewellyn, the British Ambassador to France and Monaco, opened the event with a speech.

According to the Department for International Trade France, he claimed that "beyond all things, sport has a capacity to unite".

The keynote speech was delivered by Lord Chris Holmes, Great Britain’s most successful Paralympic swimmer with a medal haul of nine golds, five silvers and one bronze.

Holmes was the director of Paralympic Integration, responsible for the organisation of the London 2012 Paralympics, and has been a member of the House of Lords since 2013.

He spoke about the potential of the Games and the lessons taken from London 2012.

Planning and ambitions for Paris 2024 were also discussed, looking at how Britain can support France in this sense.

Always delighted to have a chance to speak about the incredible potential of the @Paralympics & lessons from @London2012 - embedding #accessibility #Diversity & #Inclusion @Paris2024 @Tokyo2020 #BuildingALastingLegacy @SportisGREAT pic.twitter.com/4YBt8HV0LH

During an afternoon panel session, entitled community engagement and legacy programmes, Sport England strategic lead Adam Blaze insisted Paris will never have an opportunity as big as the 2024 Paralympics.

"Whatever you are planning for 2024, rip it up and think bigger," he said.

A panel discussion was also held on how the Paralympics can lead societal change.

Britain’s marathon record holder Richard Whitehead was joined in talking about the topic by Anna Scott-Marshall, director of communications at ParalympicsGB, and Marie-Amélie Le Fur, the chairwoman of the French Paralympic and Sports Committee.

Last month, Paris 2024 established an endowment fund which, it claims, will help to finance legacy projects for the Olympics and Paralympics.

The fund was asserted to have been identified by Paris 2024 and its partners during the bid phase for the Games, with the idea that it could act as a resource to aid projects.

The fund will gather donations from the partner companies of Paris 2024 who want to strengthen their commitment to the event.

Paris 2024 promise the fund will have its own governance structure, bringing members of its Executive Board together with partners.