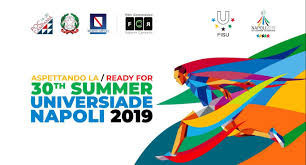 A film made to promote this year's Summer Universiade in Naples has been shortlisted for a prestigious award.

The film Waiting for the 30th Summer Universiade Napoli 2019 has been selected out of 950 entries for 55 countries for an award at the Sport Movies & TV 2019 in Milan.

It will be up for the top prize in the category "Olympic Spirit - Olympic Values".

The movie, directed by Francesco Patierno and produced by the Campania Region Film Commission, details the build-up to the Universiade in July.

There is due to be a special screening of the film tonight at the Palazzo Giureconsulti in Milan.

The awards ceremony is scheduled to take place at the Grand Auditorium of the Palazzo Lombardia in the Italian city tomorrow.