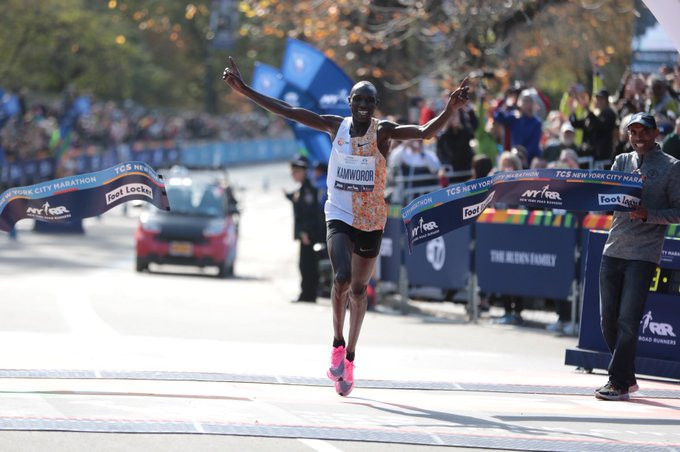 Kamworor claimed his second men’s title in three years, having finished third in 2018 and won in 2017 in this World Marathon Majors event.

The 26-year-old crossed the finish line in Central Park in 2 hours 08min 13sec, pulling away from fellow countryman Albert Korir in the 24th mile.

The Ethiopian was in 17th place when he withdrew.

In the women’s race, Jepkosgei powered away from four-time champion Mary Keitany in her first-ever race at 26.2 miles.

She triumphed in 2:22:38, only seven seconds off the course record, and becomes the first woman to win in New York City in her marathon debut since 1994, when Kenya's Tegla Loroupe achieved the feat.

Keitany finished in the runners-up spot, 54 seconds behind.

In her marathon debut, with the second fastest time ever by a woman in the open division, Joyciline Jepkosgei 🇰🇪 is your 2019 #TCSNYCMarathon champion! pic.twitter.com/d7vZD1Q8Cy

A number of home athletes were attempting to run Olympic standard in order to secure a spot in the United States Olympic Marathon Trials in Atlanta on February 29.

Olympians Desiree Linden and Jared Ward were the top American finishers today, each in sixth place.

Sara Hall, who had finished fifth in the Berlin Marathon in September in a personal best  2:22:1, dropped out at mile 18 with stomach issues.

Schar, 34, made it three successive victories at the event in 1:44:20, becoming the first person to sweep all six Big City marathons that are part of the World Marathon Majors series in one year since Tokyo was added to the group in 2017.