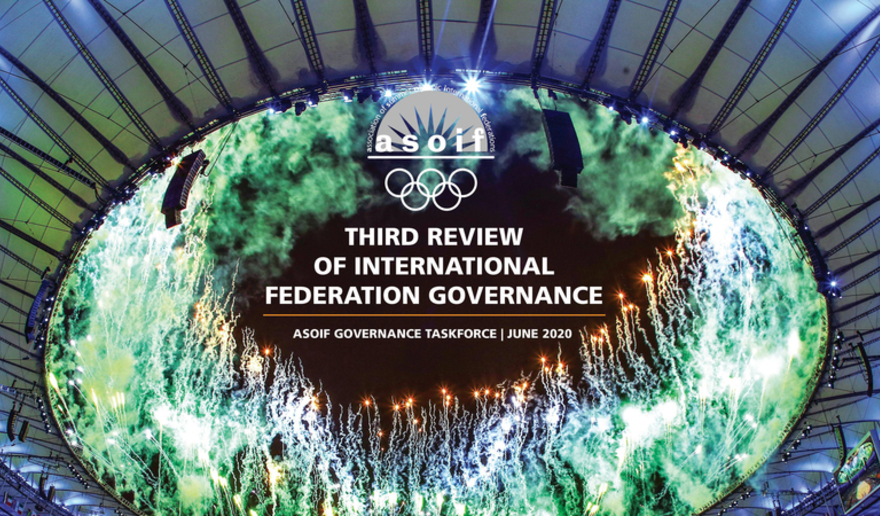 The third edition of the governance review was published by the umbrella body yesterday, with International Federations (IFs) grouped for the first time based on their total score.

The previous studies by ASOIF in 2017 and 2018 saw IFs remain anonymous.

The top six IFs all scored between 170 and 187 points out of a possible 200 in the questionnaire.

A total of 50 indicators were divided across the principles of transparency, integrity, democracy, control mechanisms and development and solidarity, with each offering a maximum four points.

FIFA has welcomed the result, with football’s governing body saying it placed second out of the IFs after achieving a score of 180.

"The findings of ASOIF’s third annual review on IF governance are an important recognition of the hard work and commitment that the current FIFA administration has shown to implementing the new reforms, as well as best practice, in the field of good governance since 2016," said Emilio Garcia Silvero, FIFA chief legal and compliance officer.

"We thank the ASOIF Governance Taskforce and independent experts involved for this recognition and the publication of the third annual governance review.

"With many more initiatives and ongoing developments planned in this area over the coming months, FIFA is committed to ensuring that it is a strong, modern and progressive institution; one that not only provides the right support for all of football and stakeholders but also ensures the growth and development of the sport across all six confederations and 211 member associations around the world."

"By placing good governance as a key pillar of our ITF2024 strategy, we have established an ambitious programme of work to modernise our governance for the betterment of the sport, globally," he said.

"In addition to an ongoing governance review, this includes operating a state of the art anti-doping programme, strengthening our safeguarding provisions and implementing robust procedures for managing the integrity of the game of tennis itself.

"We are delighted to see the fruit of our labour recognised by the independent ASOIF governance review, in which the ITF is identified as having improved governance, and remains ranked in the top tier of summer Olympic International Federations.

"We remain committed to doing more and better in this domain."

World Rugby, among the six top-scoring IFs, says its review will feature a diverse and game-wide representative working group comprising of independent experts, players and representatives from emerging and established rugby nations, with a broad range of experience and expertise.

The group will review and analyse the effectiveness of the present governance model.

This will include assessing gender balance and diversity on World Rugby Boards and Committees, player representation within governance structures and committee structure.

The format and frequency of Council Meetings to best serve the global game, criteria for appointment of members and the fit and proper person test for elected members will also be assessed.

The governing body said it scored 36 out of 40 in both the integrity and democracy categories, as well as 28 for control mechanisms and 27 for development.

Transparency was World Athletics' lowest-scoring category with a total of 24 points.

World Athletics said the organisation has been focused on reforming its decision-making processes over the past four years, to ensure they are "representative, high quality and are held accountable for those decisions."

The governing body highlighted improved governance, structures and processes within the organisation, with reforms seeing the establishment of the Athletics Integrity Unit, vetting and disciplinary processes, inclusion of the athletes' voice to the ruling Council and progress on gender equality at all levels of the sport through its Gender Leadership Taskforce.

Election processes and transparency were among other improvements highlighted by World Athletics.

"I want to thank our Council, Area Associations and Member Federations for their diligent work over the last four years to reshape the way in which our sport is governed," World AThletics President Lord Sebastian Coe said.

"Our headquarters staff are working hard to finish the remaining tasks required to complete our governance reforms, notwithstanding the disruption caused by the pandemic.

"We still need to fill some independent roles to support the Executive Board and the Council and establish greater transparency but we are confident that work can be completed this year."

World Athletics has said it will be in a position to publish its annual report and audited accounts for 2019 on its website in the coming months, along with agendas, minutes and decisions of its Congresses, Council Meetings and Commissions.

The ITTF has said it has delivered on a promise to improve governance, with the governing body revealing it had moved up to the A2 group from the B category, while it moved from 21st in the 2018 report up to 11th position.

The ITTF said its first-ever strategic plan in 2018 sought to ensure improved governance, with reforms beginning that year.

ITTF President Thomas Weikert, who will seek re-election in 2021, welcomed the findings of the report.

"The results shown today by the ASOIF findings indicate that the ITTF is certainly on the right pathway," Weikert said.

"We are satisfied with the progress made since 2018; however, we should not be complacent.

"I want to thank my Executive Committee colleagues and staff for their commitment to good governance.

"We will continue striving for improvements in the management of our organisation.”

The ITTF said it scored highly in transparency, with the governing body adding it is now holding talks over its development plans, the establishing a more independent disciplinary tribunal and more robust control mechanisms.

World Taekwondo joined the ITTF in moving into the second-highest category, revealing it had scored 140 points.

Transparency was World Taekwondo’s highest-scoring area with 34, followed by 30 for development and 27 for democracy.

World Taekwondo achieved scores of 26 and 23 for control mechanisms and integrity, respectively.

"We are therefore delighted to see that our hard work is paying off and has been recognised in the latest ASOIF governance review.

"We know that there is still room for improvement and we remain dedicated to establishing World Taekwondo as a leading International Federation in good governance and sustainability.

"We will evaluate the results of this review in great detail and determine how we can enhance our governance further.

"We have already developed plans to implement a number of reforms, such as the introduction of a dedicated Integrity Unit, which will help us to continue to improve our practices and standards to reach the highest levels of governance and integrity."

World Triathlon said it had finished in the top 10 IFs, with ASOIF saying it was a "role model for the publication of disciplinary decisions, the conflict of interests policies, the contracts with Continental Confederations for development funding, the monitoring of these expenses, the resources dedicated to Paralympic sport and data protection."

Marisol Casado, World Triathlon President, thanked the work of staff at the governing body and said it was aiming to reach the top tier in the next report.

"We are extremely proud of the results of this report, and the work, not only now but in the last few years, we have done in this regard within our federation," she said.

"Of course, there is always room for improvement, and we will work to be in the top group in the next edition of the report, but it is great to see that our policies and procedures are respected worldwide, and even considered a role model in some other IFs."

The UIPM said its "moderated score was higher than the average IF improvement", with the organisation saying it had received praise for its election rules and code of ethics, the publication of more detailed information and the creation of a whistleblower hotline.

"We have made a lot of progress in a wide variety of areas, and we are looking forward to further improving our score in the next review period," President Klaus Schormann said.

"Our process of improvement is continuous and we look forward to honouring our pledge that all member federations will be supported in attending the next electoral UIPM Congress."

The six IFs in the lowest-ranked category scored between 84 to 119 points.

A total of 31 IFs participated in the latest governance review, down from 33 in the second.

ASOIF said 32 questionnaires were distributed, with the International Boxing Federation not included.

World Karate declined to participate in the survey.

The full report can be accessed here.