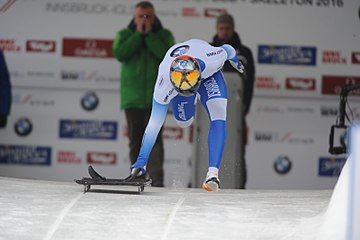 Bobsled/Skeleton Israel (BSI) are targeting a spot at the Beijing 2022 Winter Olympic Games after securing funding to help support the sports for the next six years.

Thanks to funding provided by Alex Nataros and Fly Uncharted the team has enough funding to continue until the end of Beijing 2022.

Through the financial support the BSI are hoping to field teams in female monobobsled and two-women bobsled, as well as teams in two-man and four-man bobsled.

Edelman, a former BSI head of development who is currently a bobsleigh pilot says his dream is for the BSI to have "a competitive and sustainable programme."

"It has been the dream of all of us at BSI to have a competitive and sustainable programme, one that competes for the podium, and for Israel's best winter Olympic result," said Edelman.

"The resources required to do so are immense and require a long-term development programme.

"The best way to accomplish this is by building the development programme while simultaneously pushing towards a 2022 Olympic berth which will encourage further athlete involvement in Israeli Bobsled, and hopefully additional sponsorship.

"Alex {Nataros} and Fly Unchartered have agreed to help support the programme over the next six years with the goal of challenging for a medal position at the 2026 Olympic Games.

"If there is a track open this season, which I believe there will be, we will be hard at work, training to make Israel’s first bobsled Olympic berth a reality."

Thanks to the additional funding support, the BSI's plans are able to move forward.

A documentary following the team's progress is set to be filmed, with a focus on the next steps - fielding athletes, training and finding sponsors for car rentals, logistics and flights.

The documentary also follows Edelman's progress competing as a bobsleigh pilot, with his return following a break from competitive action.