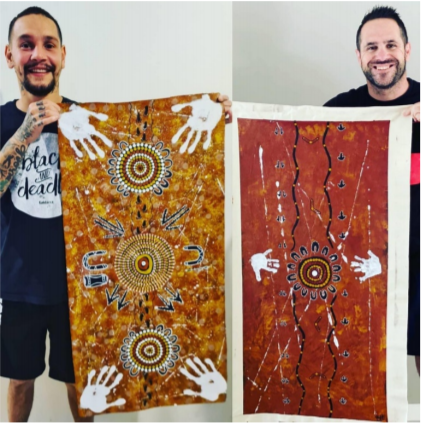 Boxing Australia is to incorporate indigenous designs into its national team uniforms.

The governing body has recruited two former indigenous boxers to create artwork which will be added to the red and blue singlets and shorts used in competition.

Brad Hore, who competed at the Sydney 2000 and Athens 2004 Olympic Games, and Paul Fleming, who boxed at Beijing 2008, have both used their experience as elite athletes to re-connect with their local communities after their careers.

Hore educates indigenous youth on the importance of making positive life choices, while Fleming works at a Western Sydney school as an Aboriginal education officer.

Describing his design, Hore said: "The kangaroo and emu footprints line either side representing Australia's Coat of Arms.

"The soaring boomerang represents the knowledge passed down through generations of talented boxers.

"A meeting spot in the middle is where in spirit all past and future boxers will meet, linking us all together."

"The centre circle represents the Olympics, and two circles represent the past and future.

"I have done the feel moving towards the centre because everything in the past has led there.

"And the Olympics can change your future.

"I have also done emu and kangaroo footprints as they are on our coat of arms.

"I've also added symbols for people around the two end circles to represent everyone who's been there through your journey to the Olympics and onto the future."

Boxing Australia has qualified 19 indigenous Olympians, the most out of any sport.

The number is set to rise at the postponed Tokyo 2020 Games next year, as Alex Winwood has booked his spot at flyweight.

"We're excited to work with Paul and Brad on this project and thank them for their enthusiastic involvement," said Boxing Australia chief executive Josh O'Brien.

"It has been a privilege to work with them to achieve both of these things.

"We'll now work with our corporate partner Sting Sports to incorporate the art into the national competition uniform, and hopefully see it represented at an international tournament soon."