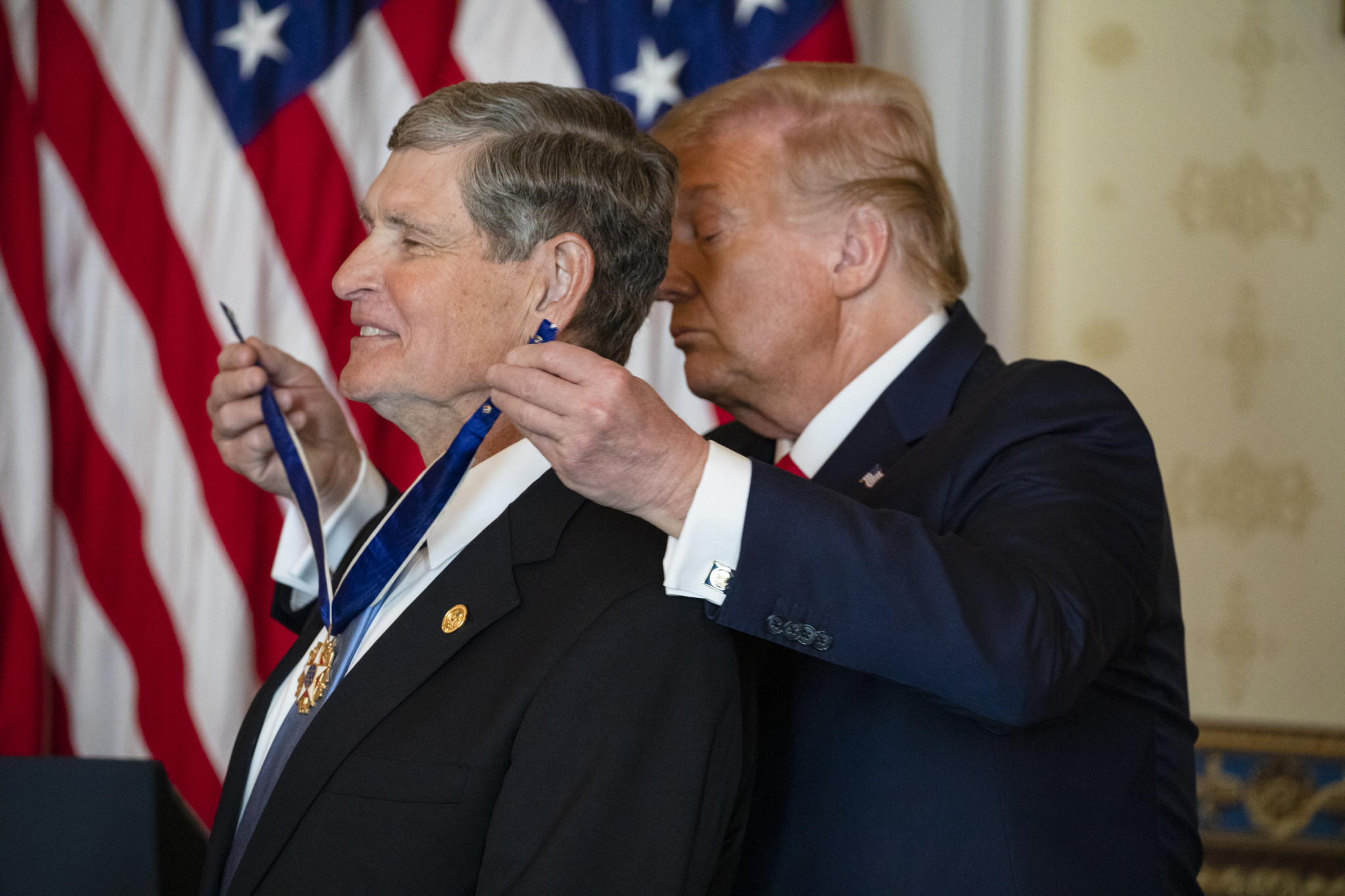 The investiture took place at an informal ceremony in the White House attended by his wife Anne, and his four children.

"Jim has personified the greatness of our country throughout his life, whether he was running in a track race or running for office," said Trump.

"He is a giant of American athletics, a dedicated public servant and a man of charity, generosity and faith, a legendary athlete."

"I remember a lot of your races," the President told Ryun as he presented the medal which is the highest decoration available for American civilians.

Ryun spoke of his pleasure in receiving the award from Trump "truly one of the greatest Republican Presidents."

He recalled being dropped by the church baseball team as a youngster and said: "The accolades have exceeded anything I could have imagined.

"These achievements we are celebrating began with a simple prayer.

"After being cut from the church baseball team and the junior high school basketball team, I began ending each day with this simple prayer.

"Dear God, I’d like my life to amount to something. I‘d appreciate your help. If you can help me out and make a plan with something which includes sports of some kind, I’d really appreciate it.

"There is no doubt in my mind that we are all made for a purpose. I was made to run."

The medal is awarded for "especially meritorious contributions to the security or national interests of the United States, to world peace, or to cultural or other significant public or private endeavours."

The White House citation said: "Jim Ryun is a world class athlete and a highly respected former member of Congress.

"As one of the best middle distance runners of all time, he is the last American to hold the world record in the mile run.

"He proudly represented the United States at the 1968 Summer Olympics, earning a silver medal in the 1500m race.

"Following his success on the track Mr Ryun channelled his patriotism into a noble career in public service representing the second congressional district of Kansas for more than a decade, distinguishing himself as a principled conservative.

"The United States proudly recognises Jim Ryun for his meritorious contributions to our nation."

Ryun came from Wichita in Kansas and developed into a world-class runner in a very short space of time.

At 17 years of age, he had forced himself into the USA team for the 1500m at the 1964 Tokyo Olympics, but hampered by a heavy cold, he failed to reach the final.

He set a world record in the mile and was named sportsman of the year by the prestigious American magazine Sports Illustrated in 1966 - one of many accolades.

He met his wife Anne when she had asked for his autograph at a track meet.

By the 1968 Mexico Olympics, Ryun was the world record holder in the mile and 1500m, but lost out to Kenya’s Kip Keino in the race for gold.

He was still world record holder over both distances by the time of the 1972 Munich Games, but tripped over in the heat and did not qualify for the final.

Ryun later had a career in professional track and field as well as a career in photography and in business before turning to politics.

He is the second sportsman to receive this award from President Trump, after 1960 basketball gold medallist Jerry West, who was honoured last year.