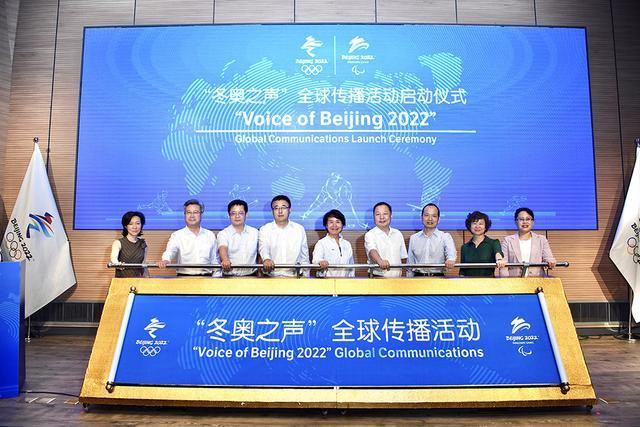 Beijing 2022 has launched a new initiative that looks to promote the Winter Olympics to the international community as well as update the world on the progress of its preparations.

The "Voice of Beijing 2022" campaign was kicked off jointly by the Beijing Organising Committee for the 2022 Olympic and Paralympic Winter Games and the China Media Group (CMG) at the Beijing 2022 headquarters in Shougang Park.

It will look to take advantage of CMG's multiple platforms including its social media accounts at home and abroad, as well as overseas radio stations, multilingual websites and mobile applications.

"Beijing 2022 is regarded as one of China's significant landmark events," said Han Zirong, vice-president and secretary general of Beijing 2022 in her speech at the ceremony.

"General secretary of the CPC Central Committee Xi Jinping has issued many instructions that act as the fundamental guidelines to improve our works.

"Under the leadership of the CPC Central Committee, we have taken effective action to realise our mission of being inclusive, open, green and clean.

"Over the past five years, we have worked closely with interested parties and pushed forward the preparations for Beijing 2022 in an orderly manner."

Han spoke of the construction of venues and infrastructure, stating that all buildings will be completed by the end of 2020.

She also mentioned there were over 850,000 applications for volunteering as well as 32 enterprises that have become Beijing 2022 sponsors.

"Since the COVID-19 outbreak, Beijing 2022 is implementing strict prevention and control measures against the epidemic, while pressing ahead with the preparations in an orderly manner," added Han.

Beijing 2022's preparations will be mentioned on 14 overseas radio stations from 12 countries as part of their coverage.

The launch ceremony was presided over by Zhao Weidong, director of the communications department of the Beijing 2022 Organising Committee.

Hosts from CMG's English, Japanese, Hebrew, Lao, Tamil and Arabic services were all in attendance.