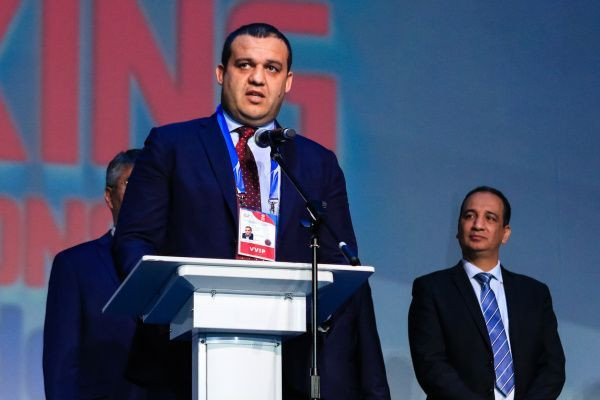 A group of nations have today publicly called on Russia’s Umar Kremlev to stand to become the new President of the International Boxing Association (AIBA).

Ukraine, Serbia, Colombia, Paraguay and the Solomon Islands issued a joint press statement in which they claimed the four candidates to have declared themselves "so far are seen as tainted, weak, or lacking a vision".

Azerbaijan's AIBA Executive Committee member Suleyman Mikayilov was the first to announce he was standing.

The deadline for nomination is November 2 and Kremlev, the 37-year-old secretary general of the Russian Boxing Federation (RBF), is widely expected to put himself forward having recently recovered from coronavirus.

"We are convinced that Umar Kremlev is a person who knows and understands boxing, the needs of the Federations, their athletes and coaches," wrote Emilio Aranda of the Boxing Federation of Paraguay in a letter of support for Kremlev.

"He is the right person for the development of a transparent development strategy that restores AIBA's credibility in the International Olympic Committee (IOC) and the great family of amateur boxing worldwide."

Earlier this month, Kremlev claimed "more than 50 countries" had asked him to stand for AIBA President.

The five Federations have listed several projects they claim show Kremlev is ideally suited to leading AIBA, which is currently suspended by the IOC from organising the boxing tournament at next year’s re-arranged Olympic Games in Tokyo following allegations of corruption and mismanagement.

These include the hotline set up by Kremlev and the RBF earlier this year to support victims of the COVID-19 pandemic with volunteers, including several boxers, helping deliver 3.5 million face masks and 5,000 tons of hand sanister and antiseptics to help members of the sports community and the general public affected by the situation.

"One of the main initiators of the necessary reforms in our sport, during a global pandemic, is Umar Kremlev," Volodymyr Prodyvus, President of the Ukrainian Boxing Federation, wrote.

"He persistently continues to carry out actions to resume the competition, help athletes and support AIBA in general.

"This is the best evidence of his leadership skills, understanding the problems of boxing and sports in general, as well as knowledge of solving the tasks set, which is now so essential for AIBA."

The Federations cite the initiative launched by the RBF, under Kremlev, to pay Russia’s Olympic boxing champions and their coaches a monthly salary.

He has also overseen a scheme, they wrote, that means regional boxing organisations across Russia are provided with gloves, headguards and other equipment to supplement regular funding.

Kremlev is also praised for other schemes launched since his appointment as chairman of the AIBA Marketing Commission.

These include establishing international Boxing Day on July 22 and the creation of the Global Boxing Forum, an event designed to help bring amateur and professional boxing closer together and increase cooperation.

Kremlev was also behind the launch of the AIBA Global Forums, an opportunity for National Federations in regions across the world to quiz senior leaders from the world governing body before the coronavirus crisis meant they had to be put on hold.

In a last-ditch attempt to prevent AIBA being suspended by the IOC, Kremlev had in May 2019 offered to wipe out the International Federation’s $16 million (£12 million/€13.5 million) debt.

His offer was rejected by the IOC.

Kremlev is now behind the re-launch of the AIBA Global Boxing Cup – a remodelled version of the old-World Cup last held in 2008 – with a prize purse of nearly $2 million (£1.5 million/€1.7 million).

"Umar Kremlev has made a great contribution to boxing reform with his ideas, skills and activities so far," Nenad Borovčanin, President of the Serbian Boxing Federation, wrote in his letter urging Kremlev to stand.

"He has not been for a long period in AIBA, only two-three years, but with his work, he has already done a lot for boxing.

"I invite him to run for President of AIBA, so that immediately after the elections we can implement reform of the AIBA Constitution and continue our dialogue with the IOC."