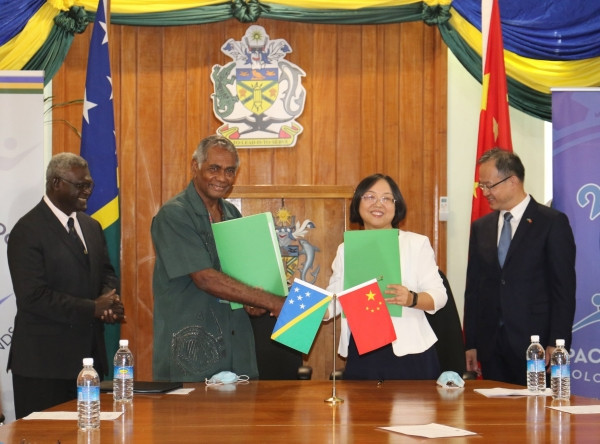 An implementation agreement has been signed between the Solomon Islands Government and China that finally paves the way for construction to begin on venues and facilities for the 2023 Pacific Games.

A six-court tennis facility is expected to be another landmark project.

It is claimed preparations for the 2023 Pacific Games, along with other infrastructure projects, would inject nearly $8 billion (£6 billion/€7 million) in new investments into the Solomon Islands over the next four years.

Chairman of the Solomon Islands National Hosting Authority and secretary to the Prime (SPM), Jimmy Rodgers, and his Chinese counterpart, Gong Rui, the counsellor of economic and commercial affairs in the Chinese Embassy in Honiara, signed the agreement.

A 17-member of the Chinese technical team who have been working on the project also attended.

They had arrived last month after originally having been delayed by the coronavirus pandemic.

The Solomon Islands had originally reached an agreement in July 2019 with Taiwan to build the facilities, including the National Stadium.

But at the end of last year, relations between the two countries broke down, with the Pacific nation pledging its diplomatic allegiance to China instead.

Sogavare claimed the project, which comprises seven separate infrastructure facilities, "is one of the largest infrastructure projects, funded and built by the People’s Republic of China in any of PRC’s partner Pacific Island countries".

He added: "For this gift, I convey my sincere gratitude to the President, the Government and the people of the People’s Republic of China."

Li hailed the Games Project "is a symbol of friendship" between Solomon Islands and China.

"The Stadium will have the most modern facilities ever seen in the Pacific," Li said.

"It will be a national pride for Solomon Islands and China is proud to be part of it."

Construction is expected to officially begin in May next year.

The Chinese have set themselves a 24-month deadline for completing the project.

The Solomon Islands’ Pacific neighbour Papua New Guinea has also committed about $12 million (£9 million/€10 million) to infrastructure for the event.

The Pacific Games, which Sogavare promised would be a "Pacific sports extravaganza", are scheduled to open in Honiara on July 14 in 2023.