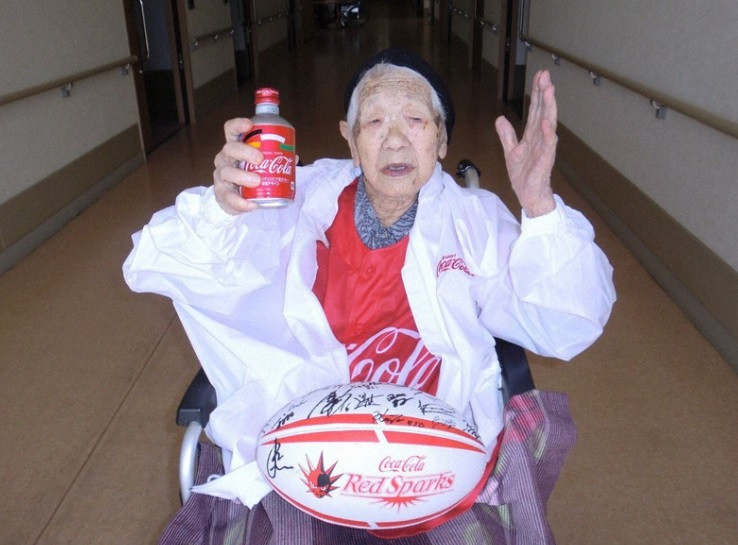 The world’s oldest citizen is set to carry the Olympic Torch next May, providing the Relay goes ahead as planned.

Kane Tanaka, 117, is recognised by the Guinness Book of Records as the oldest person in the world and was already Japan’s senior citizen.

She is due to carry the Flame when it passes through Shime in Fukuoka Prefecture next May.

Mrs Tanaka had been due to participate on May 12 this year before the event was suspended when the Tokyo 2020 Games were postponed.

Her grandson Eiji told Kyushu News: "When we were first approached about her doing it, we worried what might happen given her age, but we were getting worked up over nothing.

"We'll be happy if the people who see her holding the Torch up and looking well can think, 'There's hope in going on living.'”

Mrs Tanaka’s participation is now scheduled for May 11 2021, when she will be 118 years and 129 days old. She will use a wheelchair and be accompanied by a carer.

She was born on January 2 1903, the second of nine children in nearby Wajiro. She was nine years old when Japanese athletes first competed at the Olympics in 1912.

She later ran a noodle shop and a rice shop with her late husband Nideo.

Mrs Tanaka was nominated as a Torch bearer by the Nippon Life Insurance Company, a sponsor of Tokyo 2020 Olympic and Paralympic Games who "wanted her to send a positive message about this time of long-living."

She has been unable to meet her relatives during the pandemic, but staff at the Nigashi nursing home where she now lives, report that her physical condition remains good.

When Mrs Tanaka became Japan’s longest living citizen, she received a congratulatory certificate from the governor of Fukuoka and was also given a blanket made from Kurume-gasuri, a local cotton of high quality.

A final decision on her participation will depend on her physical condition and weather conditions on the day.

She is set to become the oldest Torchbearer in history, but other centenarians have carried the Torch. In June 2016, 107 year old Aida Mendes, known locally as "Grandma Iaià," walked with the Torch in Macapà, Brazil and lit the celebratory Cauldron in the city.

101-year-old table tennis player Alexander Kaptarenko carried the Flame in Novosibirsk during the journey to the Sochi 2014 Winter Olympics. He had trained by carrying a frozen salmon of the same weight.

In 2012 100-year-old Diana Gould was a Torchbearer in North London a few days before the Games opened. She had been born in 1912.

In that same year America’s Abel Kiviat had won gold in the 3000m team event. Kiviat, a room mate of the legendary Jim Thorpe, carried the Flame for the 1984 Los Angeles Games when he was aged 91.