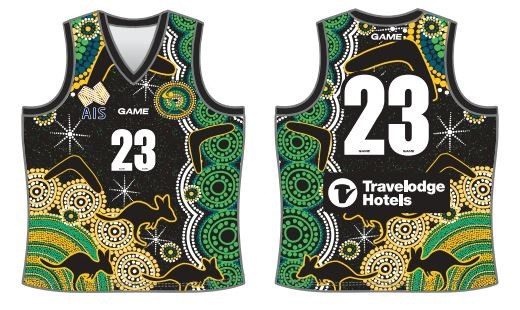 Softball Australia has unveiled two new indigenous-inspired tops that aim to celebrate athletes’ journeys from all parts of the country to the top of the sport.

Stacey Porter, captain of Australia women’s softball team and proud Kamilaroi woman, came up with the idea along with her West Australian teammate Leah Parry and hopes the new designs will help to "bring us together".

"Leah actually suggested it to me," said Porter who holds the record for the most games played for Australia with more than 430 matches to her name.

"We had a chat just after the Super Netball Indigenous Round, and she suggested we do something like that.

"It was good timing because we had just signed on to the new apparel company GAME Clothing so it was great to kickstart it and get the ball rolling."

Indigenous artist Kylie Hill and her son Jak created two tops after being contacted by Porter.

One is available to buy through Softball Australia’s apparel partner GAME Clothing and the other is a training singlet to be provided exclusively to the Aussie Spirit squad members.

Kylie and Jak have titled their design Our Aussie Spirit Journey.

"Kylie did a fantastic job coming up with the design, she was super involved and really excited to be asked," Porter said.

"The way she and Jak pulled the drawing together is really special and I’m really proud they’ve done such a good job."

Porter said the design of the training top filled her with pride for her culture and other indigenous representatives including teammates Janice Blackman and Tarni Stepto.

"It’s such a special design, the indigenous culture is something that myself, those before me and Janice and Tarni who are there now are really proud of," added Porter.

"And when we’re travelling around the world and we’ve got that design on our singlet, we can connect to that spiritually really quickly.

"It’s a really special thing to be anywhere in the world and know that you’re connected to somewhere, that’s something you can’t make up.

"I think it’s something that can bring us together, the girls in the squad who aren’t indigenous are all on board with it which is really cool, and it’s something for the other countries we compete against to understand a little more about the indigenous culture and the Australian culture too."

Australia are currently eighth in the women's softball world rankings and fifth in the men's.