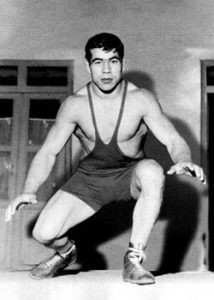 A special stamp has been released in Iran to mark the 53rd anniversary of the death of Gholamreza Takhti, the country’s 1956 Olympic wrestling champion.

Popularly nicknamed Jahān Pahlevān - "The World Champion" - because of his chivalrous behaviour and sportsmanship, he was the most popular athlete of Iran in the 20th century, although dozens of Iranian athletes have won more international medals than he did.

Takhti won his first Iranian title in 1950 and on his first trip abroad in 1951, he won a silver medal at the World Freestyle Championships in Helsinki - the first international medal ever gained by an Iranian wrestler.

One year later, he won another silver medal, again in Helsinki, this time in the 1952 Olympic Games in the under-79 kilograms category.

Takhti won an Olympic gold medal at Melbourne four years later in the under-87kg category and another silver at Rome 1960, the year after he won another World Championships title.

He narrowly missed a fourth Olympic medal at Tokyo 1964 when he finished fourth.

But it is his sportsmanship Takhti is remembered for just as well as his victories on the mat.

A famous example was a match against Russian wrestler Alexander Medved who had an injured right knee.

When Takhti found out that Medved was injured, he avoided touching the injured leg and tried to attack the other leg instead, even though he lost.

The Iranian Government officially proclaimed his death a suicide, although some speculated that he was murdered because of his political activities against the Pahlavi regime.

Fans who normally visited the Ebn-e Babvieh Cemetery to pay tributes to Takhti on the anniversary were prevented from doing so this year because of the coronavirus pandemic.