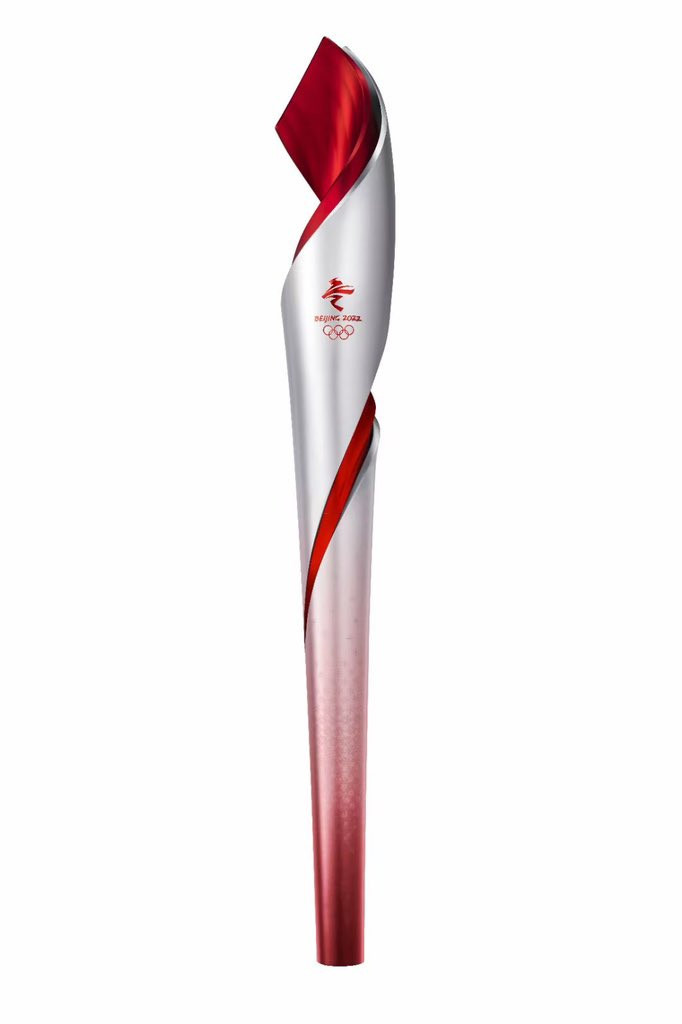 The design of the Torches which will carry the Olympic and Paralympic Flame for Beijing 2022 have been unveiled as part of celebrations to mark one year to go.

"To introduce the Torch at the start of the one-year countdown, we wish to kindle the enthusiasm and anticipation for the Beijing 2022 Olympic and Paralympic Winter Games all around the world," said Beijing 2022 culture and Ceremonies deputy director Wang Xiangyu.

"The successful design of the Torch has proved again that the Olympics always set the stage for the integration of sports, culture, art and science."

Described by organisers as "ethereal yet dynamic", the Torch is coloured red, said to bring good fortune in Chinese culture, and silver.

It is designed to invoke a blazing ribbon and represent "fire and ice", which organisers say symbolises "how it will bring light and warmth to the winter sports celebration".

They highlighted a special design feature which "allows both Torches to lock into each other at the top" during the exchange of the flame between bearers, known as "the kiss".

They claim this will highlight Beijing 2022’s "vision to promote mutual understanding and respect between different cultures".

The Torch will typically burn with hydrogen using a combustion system developed by the China Aerospace Science and Technology Corporation, although propane will sometimes be used according to circumstances.

It is time to unveil the Olympic Torch for #Beijing2022, an absolute “Flying” debut for our Torch named “飞翔” (fēi xiáng) ! 🎉🎉🎉#WeAreReady #OneYearToGo

The Flame is designed to withstand high winds and low temperatures.

The Torch itself is the work of designer Li Jianye and bears a deliberate resemblance to those used for Beijing 2008, as the city becomes the first to host both Summer and Winter Games.

"By using the same colour combination and by sharing similar artistic elements with the 2008 Torch, we aim to extend auspicious greetings to the world as we did at the Summer Games and to showcase Beijing’s rich Olympic culture," said Li.

Organisers had received 182 entries in a worldwide competition which had run since April 2020.

The winning entry was selected by a jury which included Lu Xiaobo, dean of the Academy of Arts and Design at Tsinghua University.

"The current design strikes a perfect balance between the expression of the host nation’s culture, Olympism and the demonstration of the latest industrial technology," said Lu.

The "flying" Torch is made of carbon fibre and incorporates snowflakes and clouds in a design which recalls the "Lucky Clouds" which adorned both Torch and cauldron at Beijing 2008.

The Paralympic Torch has a similar design but is rendered in gold and silver and is engraved with "Beijing 2022 Winter Paralympic Games" in Braille.

Organisers have not yet revealed details of the relay route or Torchbearers.

In 2008, some 21,800 carried the Flame in a relay described as a "Journey of Harmony" incorporating visits to 21 countries.

There was trouble from the outset with protesters infiltrating the lighting ceremony in Ancient Olympia.

The itinerary of the flame in London, Paris, and San Francisco was also hastily revised as protesters attempted to extinguish the flame in protest at Chinese Government policy towards Tibet.

There has been a Torch Relay for the Winter Games since 1952, although a cauldron did first burn at the 1936 Winter Olympics in Garmisch Partenkirchen.