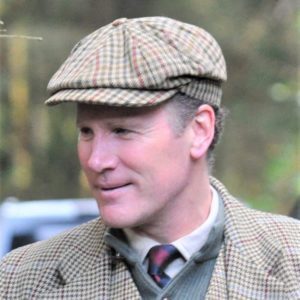 Clifton Wrottesley has been appointed as the new chair of Ice Hockey UK (IHUK) to replace Richard Grieveson, who announced in December that he was stepping down.

Ice hockey will be the second Olympic winter sport in the United Kingdom that Wrottesley has overseen.

He had previously been the chairman of British Skeleton from 2012 until 2015.

Wrottesley represented Ireland in skeleton at the 2002 Winter Olympic Games at Salt Lake City, narrowly missing a medal as he finished fourth.

He was Ireland’s Chef de Mission at the 2006 Winter Olympics in Turin.

Wrottesley, a British peer who is officially the 14th Baronet, 6th Baron Wrottesley, was selected following an open advert and competitive interview process.

The appointment of the 52-year-old Irish-born British-educated Wrottesley still must be officially ratified at the next IHUK Annual General Meeting, currently scheduled for next month, but this is expected to be a formality.

"I’m deeply, deeply honoured to have been chosen to be the new chair of Ice Hockey UK," said Wrottesley.

"I’d like to take this opportunity to pay tribute to the outgoing chair, Richard Grieveson.

"He presided over the organisation during a period of sustained success on the ice for the GB men’s team.

"It’s a hugely exciting time for Ice Hockey UK and Great Britain, as well as the sport nationally, as we work towards preparing our men’s team for the World Championship due to take place in Latvia in May and June this year."

Besides serving as the chairman of British Skeleton, Wrottesley was a Board member of the British Bobsleigh and Skeleton Association until 2019.

He is still involved in overseeing the British Skeleton high-performance team.

Under Grieveson, appointed in 2016, the British men's ice hockey team has re-established itself among the world's leading teams.

It earned consecutive promotions in 2017 and 2018 to rejoin the top division of the International Ice Hockey Federation's Championship for the first time since 1994.

They finished 13th at the last World Championships in Slovakia to retain their position among the world's top 16 teams.

"In all honesty, I want to build on Richard’s legacy," Wrottesley said.

"Our sport has been through a period of massive dislocation, largely because of the pandemic that has affected so many people’s lives inside the sport and indeed across the whole country.

"Our very best wishes go out to all those that have been affected by it.

"We’ve also witnessed significant upheaval in terms of the sport’s governance, which has come under intense scrutiny in the last couple of years and rightly so.

"The Elite League, Scottish Ice Hockey and the EIHA (English Ice Hockey Association) are affiliate members of IHUK, and they’re governed and operated under separate structures to Ice Hockey UK.

"However, they are our responsibility to work in partnership with to promote the sport we all love so dearly.

"We will, of course, work closely and hand-in-glove with them to help them achieve their goals.

"It’s our responsibility to represent them, both nationally and internationally, and that is what we should and will do.

"We should also reach out to other areas of the sport to help represent them nationally and internationally."