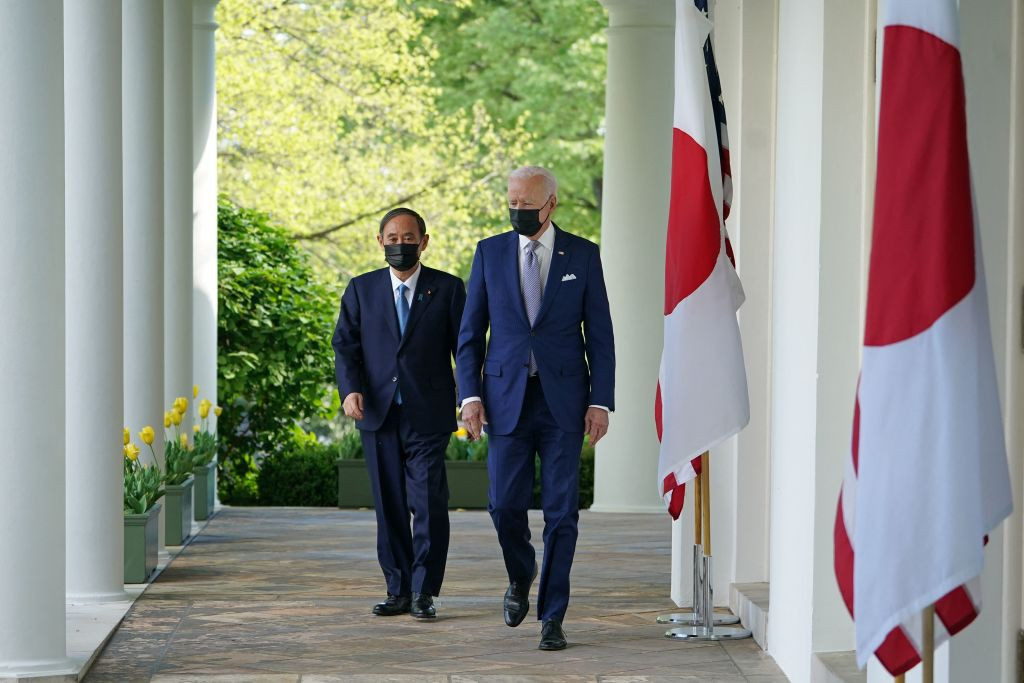 Suga, the first head of state to visit the White House under the Biden administration, said his country was doing its "upmost" to prepare for the Games amid speculation that the event might not go ahead because of a rise in COVID-19 cases across the world.

"They are doing everything possible to contain infection and to realise safe and secure Games from scientific and objective perspectives," Suga told a joint news conference.

"I expressed my determination to realise the Tokyo Olympic and Paralympic Games as a symbol of global unity this summer, and President Biden once again expressed his support."

Biden "supports Prime Minister Suga's efforts to hold a safe and secure Olympic and Paralympic Games this summer", a joint statement after the meeting read.

"Both leaders expressed their pride in the US and Japanese athletes who have trained for these Games and will be competing in the best traditions of the Olympic spirit," the statement added.

It remains unclear whether Biden himself will attend the Tokyo 2020 Olympics as the White House has refused to confirm the US President's plans for the Games.

International spectators have been banned while the number of guests is set to be severely limited as part of COVID-19 countermeasures set to be in place at the event.

Suga and Tokyo 2020 organisers were forced to reiterate their commitment to the Games taking place in their rearranged slot after a senior member of the Japanese Government admitted cancellation remains an option if the COVID-19 situation in the country worsens.

"If infections spread because of the Olympics, I don't know what the Olympics is for," Toshihiro Nikai, second-ranked member of Japan’s ruling Liberal Democratic Party said, before later attempting to backtrack on his comments.

Cases have been rising in Tokyo and across Japan following the lifting of the state of emergency.

Ten Japanese prefectures, including the Olympic and Paralympic host city, have been placed under stricter measures to curb the spike in infections.

The rise in cases also comes amid a slow rollout of COVID-19 vaccines in Japan to date, with latest estimates suggesting only one per cent of the population has received a jab.

The Tokyo 2020 Olympics are scheduled for July 23 to August 8, with the Paralympics due to follow between August 24 and September 5.