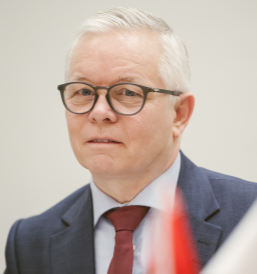 Danish Cycling Federation (DCU) President Henrik Jess Jensen will be permitted to stand for a place on the International Cycling Union (UCI) Management Committee despite the official being reprimanded by the National Olympic Committee and Sports Confederation of Denmark (DIF) Ethics Commission.

Jess Jensen's conduct was investigated by the DIF Ethics Commission last year, after concerns were raised over alleged conflicts of interest in the DCU.

The DCU President was criticised for failing to withdraw from a Board meeting which saw discussions over whether Aalborg or Odense would be put forward as a candidate to host the 2024 UCI Gran Fondo World Championships.

Jess Jensen currently works as the head of Aalborg’s roads and infrastructure department, as well as serving as President of the Aalborg Cykle-Ring.

Aalborg was ultimately selected as the Danish candidate to stage the event, despite both being considered able to host the event.

The DCU Board was found to have failed to demand Jess Jensen step aside from the process.

The UCI named Aalborg as the host of the event in September.

Jess Jensen was also criticised for putting himself into situations that created "legitimate doubts about his interests".

Former women’s national team coach Catherine Marsal had alleged Jess Jensen had forced her to select his daughter for the national team.

His involvement in a decision which saw under-17 riders, including his daughter, compete in a senior women’s event in 2017 was also highlighted.

The Ethics Commission suggested it created a perception that his involvement may have been through a desire to allow his daughter to compete.

Jess Jensen claimed following the Ethics Commission decision that he had taken note of "criticism of my personal actions" and said the DCU had "adopted new rules and guidelines for work on the Board".

DCU Board member Bo Belhage, who had raised concerns over Jess Jensen’s leadership in May and June last year, received criticism from the Ethics Commission for making covert recordings.

Belhage was expelled by the DCU in March after further criticism of the Board, including the official refusing to sign off on financial statements citing concerns over expenses.

Jess Jensen was re-elected to the European Cycling Union (UEC) Management Board in March, with the Danish official named as a vice-president of the organisation.

The DCU President is seeking to be elected onto the UCI Management Committee at the global governing body’s Congress later this year.

The UCI claims the DIF had addressed the governance concerns involving Jess Jensen, with the official therefore clear to stand in the election.

"The UCI was informed in November 2020 of the decision of the Ethics Committee of the Danish National Olympic Committee which reproved Mr Jensen’s actions in three specific situations in terms of good governance," a UCI spokesperson told insidethegames.

"As these situations all concern actions in his role as President of the Danish Cycling Union and appear to have been adequately addressed by the Danish NOC, they do not require any further action by the UCI.

"Mr Jensen was declared eligible to run for the position of member of the UEC’s Management Committee.

"The conditions for eligibility for the UCI Management Committee are set out in articles 52 and 52 of the UCI Constitution.

"The findings of the decision of the Danish NOC’s Ethics Committee are not susceptible of putting Mr Jensen’s eligibility into question."

Krieger believes the DCU’s structure and practices have reduced the Ethics Committee to "tokenism with no real power."

"The Ethics Commission itself then becomes an ethical problem, as they - as shown - just prolong the ethical and moral problems within the sport organisations," Krieger argues in a paper on the case.

"The DCU case also reveals that the real issue lies in the interpretation of the chairman’s role that does not undergo the necessary transparent surveillance apart from the questionable ethical examination.

"A critical study from outside the sport’s bubble is neither intended nor possible currently.

"In light of the questionable practices that Jess Jensen has introduced in the DCU, those selecting the UCI’s executive body’s members might want to think very carefully whether they can put trust in an individual that has led the DCU in the fashion outlined - especially if they really want to follow good governance and maintain the apparently good track record that the UCI has on working toward this objective."

Jess Jensen’s candidacy for the UCI Management Committee has received the support of DIF President Niels Nygaard, who is seeking to become European Olympic Committees (EOC) President on a permanent basis.

"Henrik Jess Jensen has during the last years shown strong skills and competences in management and leadership all competences which I hope can be of benefit to international cycling," Nygaard wrote in a supporting letter.

"I am therefore pleased to give my full support to his candidature."

Nygard told Danish newspaper Ekstrabladet that Jess Jensen had "corrected things they were criticised for" and claimed having Danish officials in roles on governing bodies could help to influence international decisions.

"I acknowledge that there have been specific areas where he has not excelled with the very highest skills, but he has done so in a number of other areas," Nygard said.

"It is from an overall consideration that the recommendation of Henrik Jess Jensen has taken place.

"We must use the opportunities that exist, and at the moment there is a window for Henrik Jess Jensen in relation to moving forward in the system.

"That window may not be there in a year or two or three.

"The things that have happened are a chapter over.

"Based on an overall consideration on my part, it is an expression of timely care that we now promote a candidate who has the opportunity to be elected internationally."

Krieger's paper on the case can be read in full here.