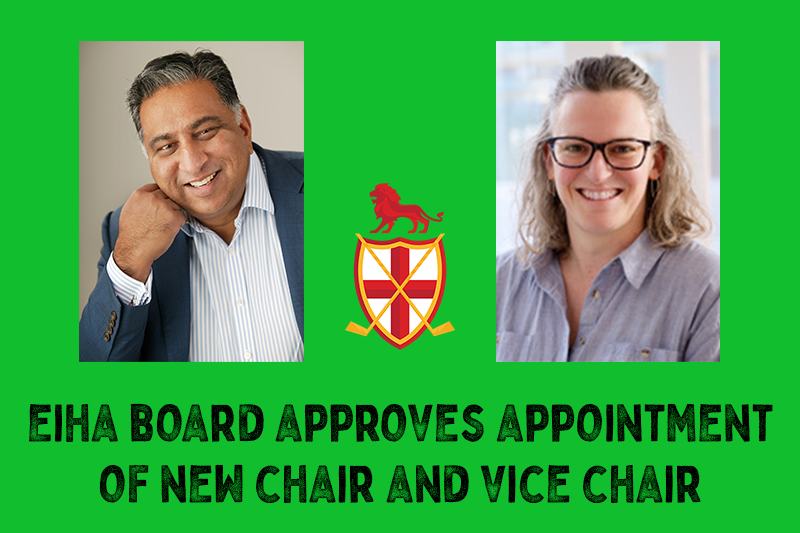 Ashraff was elected to the EIHA Board in March, with his appointment ratified at the recent Extraordinary General Meeting.

He will succeed Andrew Miller, who had been serving as acting chair since February.

Rachel Washington was confirmed as vice-chair, having been elected as an independent non-executive director in March.

"I’m hugely buoyed by his appointment as he and I have a very good working relationship," Wrottesley said.

"I very much look forward to working with Ash.

"I also met many of the new Board members over the weekend and I think the EIHA have a strong group of individuals, who are fully motivated and committed to really help drive the sport forward.

"It's vital that the sport’s governing bodies work together and I feel hugely optimistic about our future.

"Of course, there are enormous tests that need to be overcome.

"However, with a collective will and desire to see our wonderful sport flourish - and with all stakeholders pulling together in the same direction - our sport will emerge stronger and better placed to face the challenges that we all face."

"Ash’s appointment as chair of EIHA and that of Rachel Washington, one of the EIHA’s new independent non-executive directors as vice-chair, is a massive step in the right direction," Wrottesley added.

"Initial signs are really positive around a new era of close co-operation, as the sport emerges out of the effects of the pandemic and follows the nationwide Return to Play pathway."

Ashraff previously served as the chair of Ice Hockey UK, spending nearly two years in the role after being appointed back in 2013.

Ashraff previously played ice hockey as a netminder, but gave up playing to instead focus on officiating within the game.

In December, EIHA members rejected a proposal to dissolve the organisation and have a new governing body take responsibility for ice hockey in the United Kingdom as a whole.

The proposal had 60.5 per cent support, but three quarters of the membership needed to vote yes for it to pass.